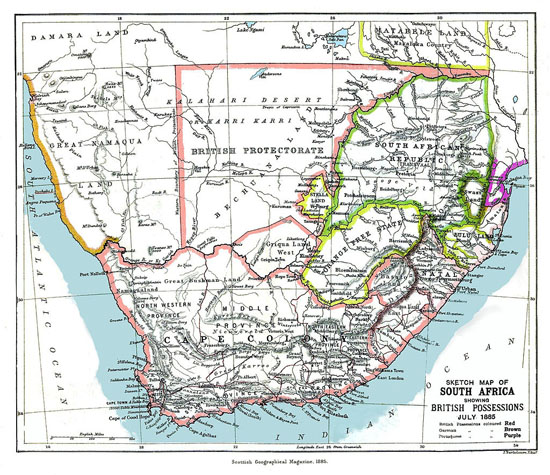 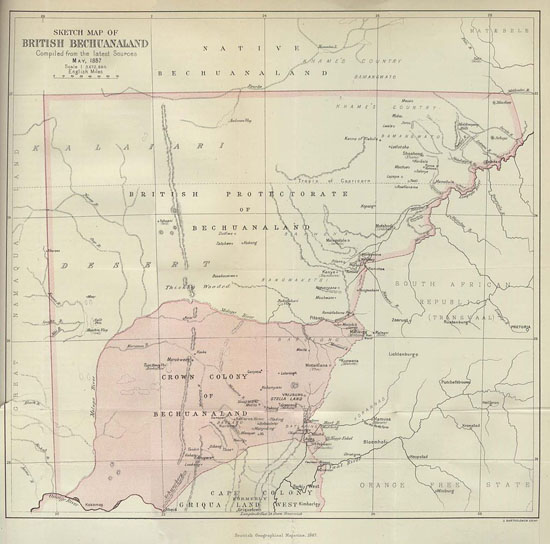 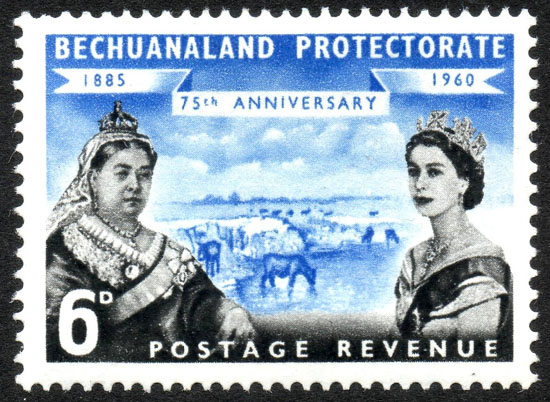 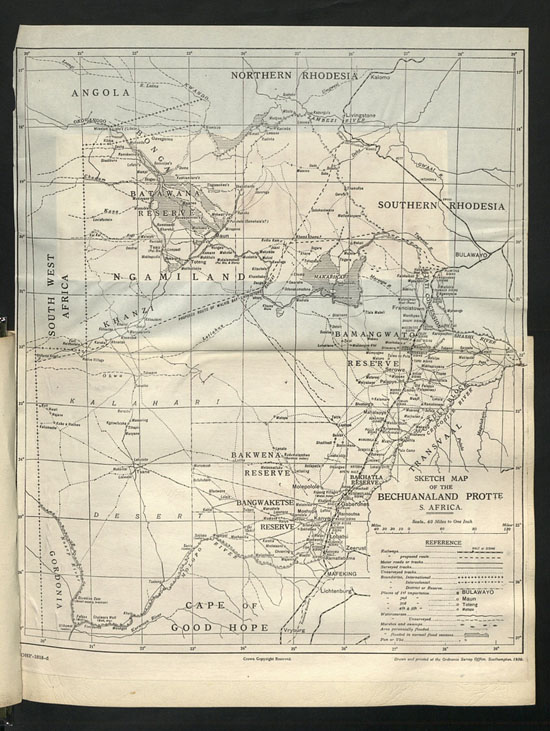 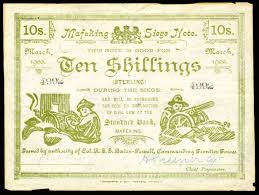 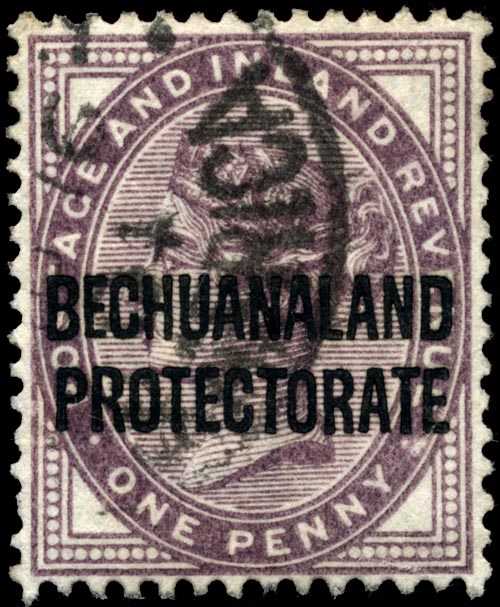 This article is about the protectorate which became independent Botswana in 1966. For the 1885–1895 British crown colony, see British Bechuanaland.
Bechuanaland Protectorate
Protectorate of the United Kingdom
1885–1966
Scottish missionary John Mackenzie (1835–99), who lived at Shoshong from 1862–76, “believed that the Ngwato and other African peoples with whom he worked were threatened by Boer freebooters encroaching on their territory from the south.” He campaigned for the establishment of what became the Bechuanaland Protectorate, to be ruled directly from Britain.

Austral Africa: Losing It or Ruling It is Mackenzie’s account of events leading to the establishment of the protectorate. Influenced by Mackenzie, in January 1885 the British cabinet decided to send a military expedition to South Africa to assert British sovereignty over the contested territory. Sir Charles Warren (1840–1927) led a force of 4,000 imperial troops north from Cape Town. After making treaties with several African chiefs, Warren announced the establishment of the protectorate in March 1885. Mackenzie accompanied Warren, and Austral Africa contains a detailed account of the expedition.

The British government originally expected to turn over administration of the protectorate to Rhodesia or South Africa, but Tswana opposition left the protectorate under British rule until its independence in 1966.

The Bechuanaland Protectorate was technically a protectorate rather than a colony. Originally the local Tswana rulers were left in power, and British administration was limited to a police force to protect Bechuanaland’s borders against other European colonial ventures. But on 9 May 1891 the British Government gave the administration of the protectorate to the High Commissioner for South Africa, who started to appoint officials in Bechuanaland, and the de facto independence of Bechuanaland ended.

The protectorate was administered from Mafeking, creating an unusual situation, the capital of the territory being located outside of the territory. The area of Mafeking (from 1980 with the incorporation into Bophuthatswana Mafikeng, since 2010 Mahikeng), was called ‘The Imperial Reserve’. In 1885, when the protectorate was declared, Bechuanaland was bounded to the north by the latitude of 22° south. The northern boundary of the protectorate was formally extended northward by the British to include Ngamiland, which was then dominated by the Tawana state, on 30 June 1890. This claim was formally recognised by Germany the following day by Article III of the Heligoland-Zanzibar Treaty, which confirmed the western boundary of the British protectorate of Bechuanaland and the German protectorate of South-West Africa and also created the Caprivi strip inherited by modern Namibia:

In Southwest Africa, Germany’s sphere of influence is demarcated thus:

This territory was originally claimed by Matabeleland. In 1887 Samuel Edwards, working for Cecil Rhodes, obtained a mining concession, and in 1895 the British South Africa Company attempted to acquire the area, but three Tswana chiefs visited London to protest and were successful in fending off the BSAC. This territory forms the modern North-East District of Botswana.