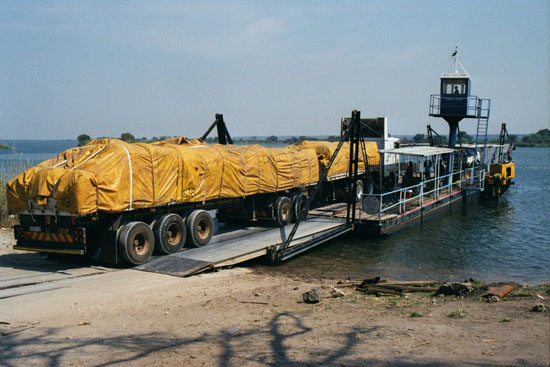 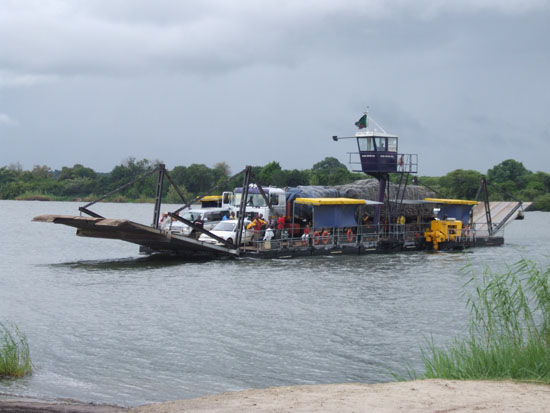 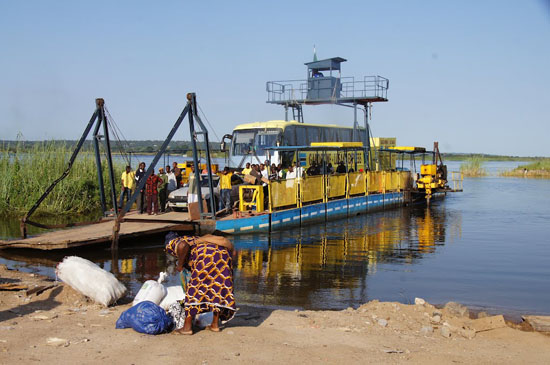 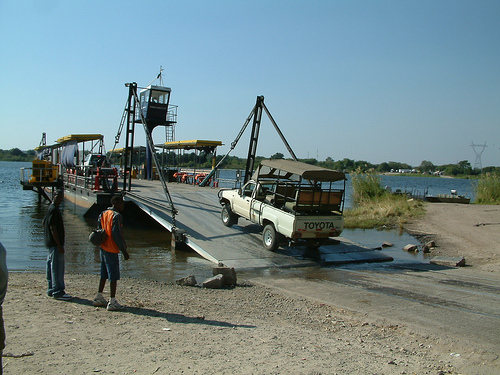 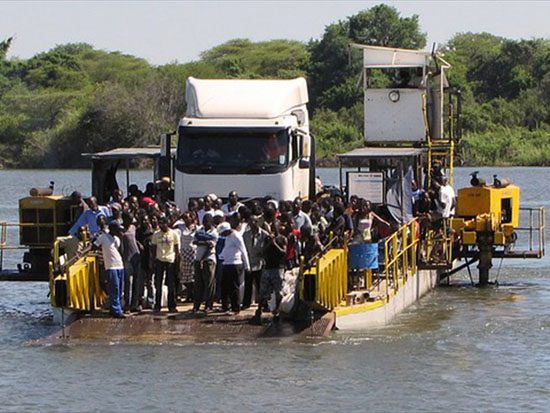 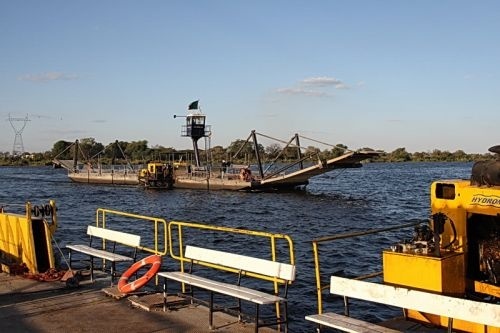 The Kazungula Ferry is a pontoon ferry across the 400 metres (1,300 ft) wide Zambezi River between Botswana and Zambia. It is one of the largest ferries in south-central Africa, having a capacity of 70 tonnes (69 long tons; 77 short tons).[citation needed] The service is provided by two motorised pontoons and operates between border posts at Kazungula, Zambia and Kazungula, Botswana.

It links the Livingstone-Sesheke road (which connects to the Trans–Caprivi Highway at Katima Mulilo and forms part of the Walvis Bay Corridor) to the main north-south highway of Botswana through Francistown and Gaborone to South Africa, and also to the Kasane-Victoria Falls road through Zimbabwe. It serves the international road traffic of three countries directly (Zambia, Zimbabwe and Botswana) and of three more indirectly (Namibia, South Africa and DR Congo).

In 2003 the ferry was the site of a disaster when a severely overloaded Zambian truck capsized one of the pontoons and 18 people drowned. The accident was blamed on the lack of weighbridges in Zambia to check the weight of trucks.

In August 2007 the governments of Zambia and Botswana announced a deal to construct a bridge at the site to replace the ferry. The existence of a short boundary of about 150 metres (490 ft) between Zambia and Botswana was apparently agreed to during various meetings involving heads of state and/or officials from all four states in the 2006-10 period and is clearly shown in the African Development Fund project map,[5] matching the US Department of State Office of the Geographer depiction in Google Earth. The planned route for the new bridge crosses this boundary without entering Zimbabwe or Namibia.

Zimbabwe already has a bridge into Zambia at Victoria Falls, 70 km (43 mi) from Kazungula. Namibia already has a bridge into Zambia at Katima Mulilo about 150 km (93 mi) upriver. This proposed bridge will give a direct connection between Zambia and Botswana. But there is still no direct connection between Namibia and Zimbabwe, nor is one planned. Traffic from Namibia to Zimbabwe has to cross to Zambia at Katimo Mulilo, and then from Zambia into Zimbabwe at the Victoria Falls; or over this new bridge into Botswana, and thence into Zimbabwe at Pandamatenga. In practice, though, there is very little such traffic along this route, or demand.[citation needed] Most traffic between Namibia and Zimbabwe goes through Botswana via Maun, which is a considerably shorter route.

For those travelling from South Africa to Zambia’s copperbelt or Lusaka by road, routes through Zimbabwe are several hundred kilometres shorter.

inistry of Transport and Communications (MTC)

Pontoon Service. CTO operates Pontoon Services at Mohembo for the general public. this service is provided free of charge daily from 0600am to 1800hrs Ferry Service. The ferry at Kazangula is also provided to ferry people and goods between Botswana and Zambia at a charge.