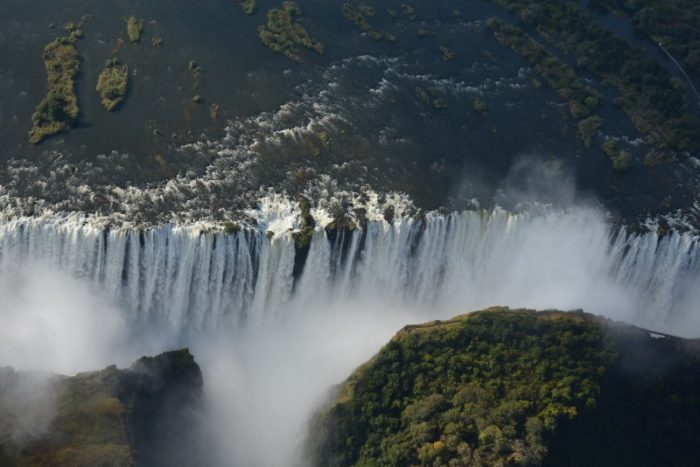 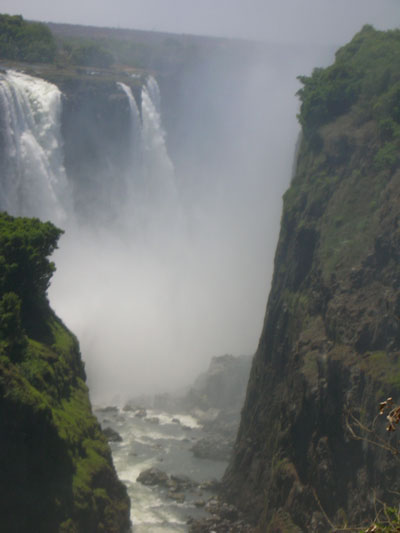 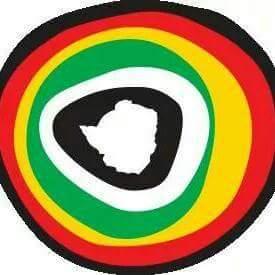 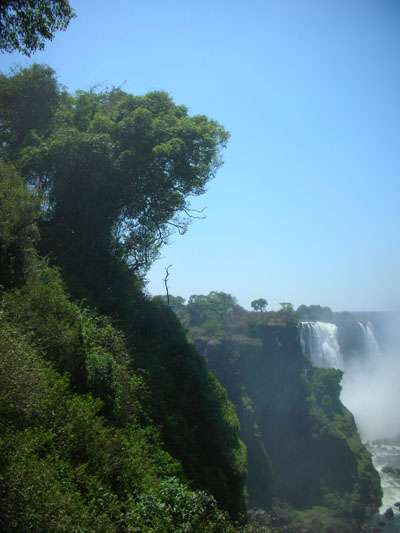 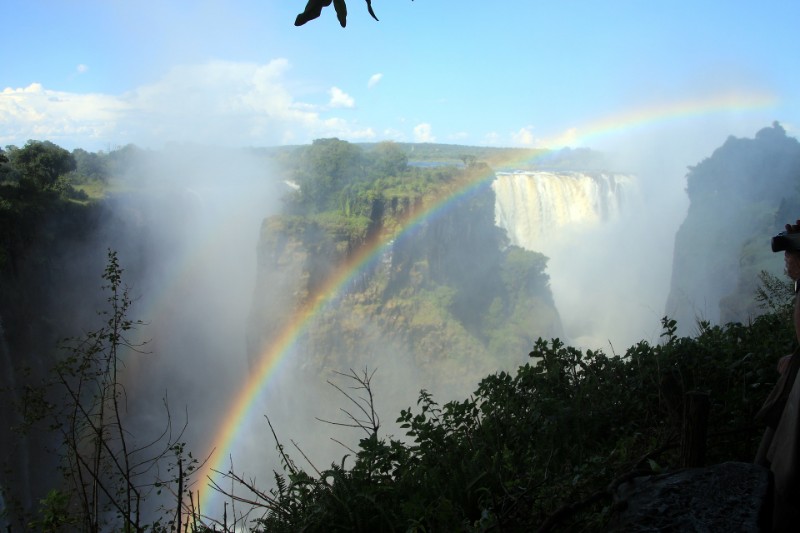 Victoria Falls (Lozi: Mosi-oa-Tunya, “The Smoke that Thunders”) is a waterfall in southern Africa on the Zambezi River at the border between Zambia and Zimbabwe.

For a considerable distance upstream from the falls, the Zambezi flows over a level sheet of basalt, in a shallow valley, bounded by low and distant sandstone hills. The river’s course is dotted with numerous tree-covered islands, which increase in number as the river approaches the falls. There are no mountains, escarpments, or deep valleys; only a flat plateau extending hundreds of kilometres in all directions.

The falls are formed as the full width of the river plummets in a single vertical drop into a transverse chasm 1,708 metres (5,604 ft) wide, carved by its waters along a fracture zone in the basalt plateau. The depth of the chasm, called the First Gorge, varies from 80 metres (260 ft) at its western end to 108 metres (354 ft) in the centre. The only outlet to the First Gorge is a 110-metre (360 ft) wide gap about two-thirds of the way across the width of the falls from the western end. The whole volume of the river pours into the Victoria Falls gorges from this narrow cleft.

There are two islands on the crest of the falls that are large enough to divide the curtain of water even at full flood: Boaruka Island (or Cataract Island) near the western bank, and Livingstone Island near the middle—the point from which Livingstone first viewed the falls. At less than full flood, additional islets divide the curtain of water into separate parallel streams. The main streams are named, in order from Zimbabwe (west) to Zambia (east): Devil’s Cataract[7] (called Leaping Water by some), Main Falls, Rainbow Falls (the highest) and the Eastern Cataract.

The Zambezi river, upstream from the falls, experiences a rainy season from late November to early April, and a dry season the rest of the year. The river’s annual flood season is February to May with a peak in April,[8] The spray from the falls typically rises to a height of over 400 metres (1,300 ft), and sometimes even twice as high, and is visible from up to 48 km (30 mi) away. At full moon, a “moonbow” can be seen in the spray instead of the usual daylight rainbow. During the flood season, however, it is impossible to see the foot of the falls and most of its face, and the walks along the cliff opposite it are in a constant shower and shrouded in mist. Close to the edge of the cliff, spray shoots upward like inverted rain, especially at Zambia’s Knife-Edge Bridge.

As the dry season takes effect, the islets on the crest become wider and more numerous, and in September to January up to half of the rocky face of the falls may become dry and the bottom of the First Gorge can be seen along most of its length. At this time it becomes possible (though not necessarily safe) to walk across some stretches of the river at the crest. It is also possible to walk to the bottom of the First Gorge at the Zimbabwean side. The minimum flow, which occurs in November, is around a tenth of the April figure; this variation in flow is greater than that of other major falls, and causes Victoria Falls’ annual average flow rate to be lower than might be expected based on the maximum flow. 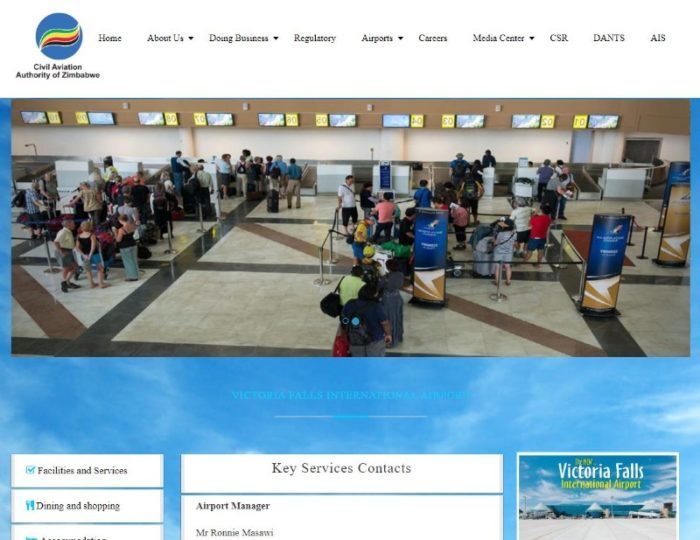 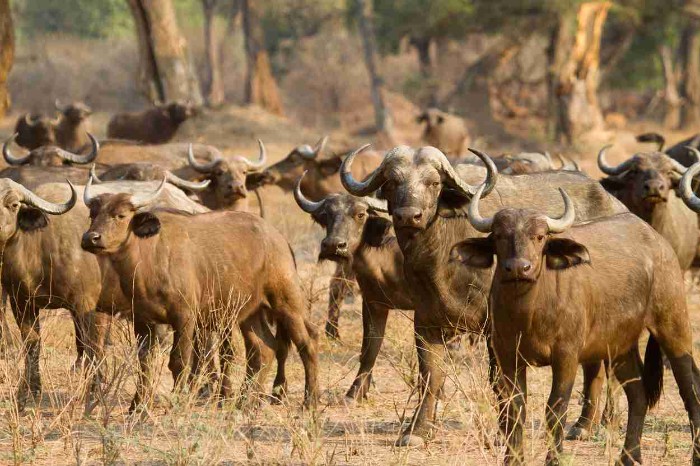 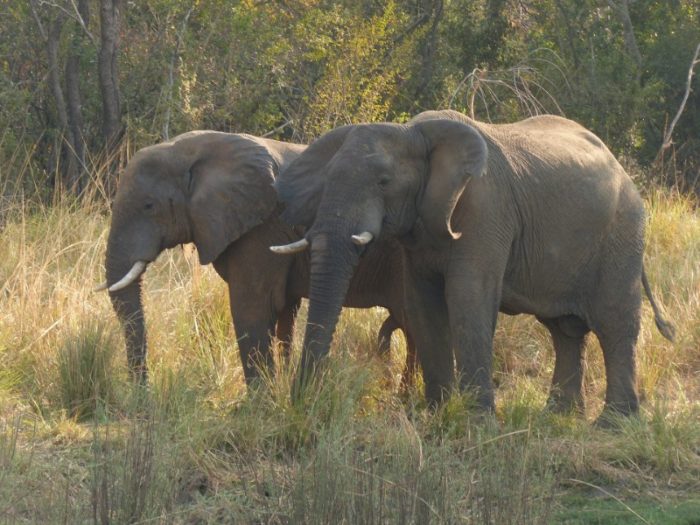